Land for sell in Soap Lake

This came to a halt during the Depression when drought hit Soap Lake. Because of the lack of water and money, the tourist trade dwindled. But, when Grand Coulee Dam was built, the irrigation canals brought new life into the area. Soap Lake has been internationally known during the past century for its uniquely mineral-rich waters and mud. Many people[who?] believe the water and mud to be successful in treatment of a variety of ailments. From the early 1900s to the mid-1940s, there were a number of sanitariums located on Soap Lake.

These early versions of spas were used by visitors from all over the country and the world. When the sanitariums, hotels, and bath houses were full, people slept in tents, and even under their cars, in order to use the water of the lake. In 1933, the Veteran’s Administration sent nine veterans, under a special project, to Soap Lake for treatment of Buerger’s disease. In November 1938, McKay Hospital was completed. For a number of years, McKay was used as a research center for the study of the therapeutic effect of the water of the lake and the climate.
City of Soap Lake


Soap Lake is located in the center of the state of Washington, 20 miles north of Interstate 90 between Seattle and Spokane, sitting in a desert environment with nine inches or less of rainfall per year and 320 days of sun. The current population is approximately 1,740 people. Soap Lake is formed at the end of a chain of lakes running down the center of the Lower Grand Coulee. The Lower Grand Coulee is over a mile and a half wide in places with sheer basalt rock walls rising 900 feet over the coulee floor. State Highway 17, Coulee Corridor-National Scenic Byway, runs through Soap Lake and up the floor of the canyon heading towards Grand Coulee Dam and Canada.

Of the five lakes existing along the Coulee Corridor, Soap Lake has the highest mineral content. The first layer of Soap Lake is made up of about 81 feet of mineral water; the second level is mud-like and consists of a stronger mineral composition with concentrations of unusual substances and microscopic life forms. The lake’s two layers have not mixed in thousands of years. The scientific community refers to lakes with this rare condition as meromictic. With only 11 meromictic lakes in the United States, Soap Lake is likely the most radical of all. The scientific community is currently exploring the lake to document some of the unusual qualities. The mineral content of Soap Lake water has been analyzed many times since the mid-1900s. The concentration of different minerals has changed throughout this time. The most recent analysis was conducted in 2000.

In 1950, Soap Lake became a city of Third Class. The population in 1952 was 2051, which grew to 2580 in 1955. At this time the lake was becoming increasingly diluted, due to the seepage of these same life-giving irrigation canals. The City Council petitioned the Department of the Interior to remedy this situation. The Bureau of Reclamation built several wells and pumps to intercept the seepage water, and the end of the 1950s diminished the dilution.
Tourism


The city is currently trying to attract tourism by attempting to revive the health aspect of the lake to attract the spa crowd. The minerals in the lake are said to have healing properties for Buerger’s disease. Two older brick buildings along the main street northbound have been renovated to house an art museum and a coffee shop.


Another tourism effort is to install a novel roadside attraction: a 52,000 pound (60 feet in height) lava lamp, formerly a Target advertisement in Times Square. That effort was profiled in the 2010 documentary film, World’s Largest. 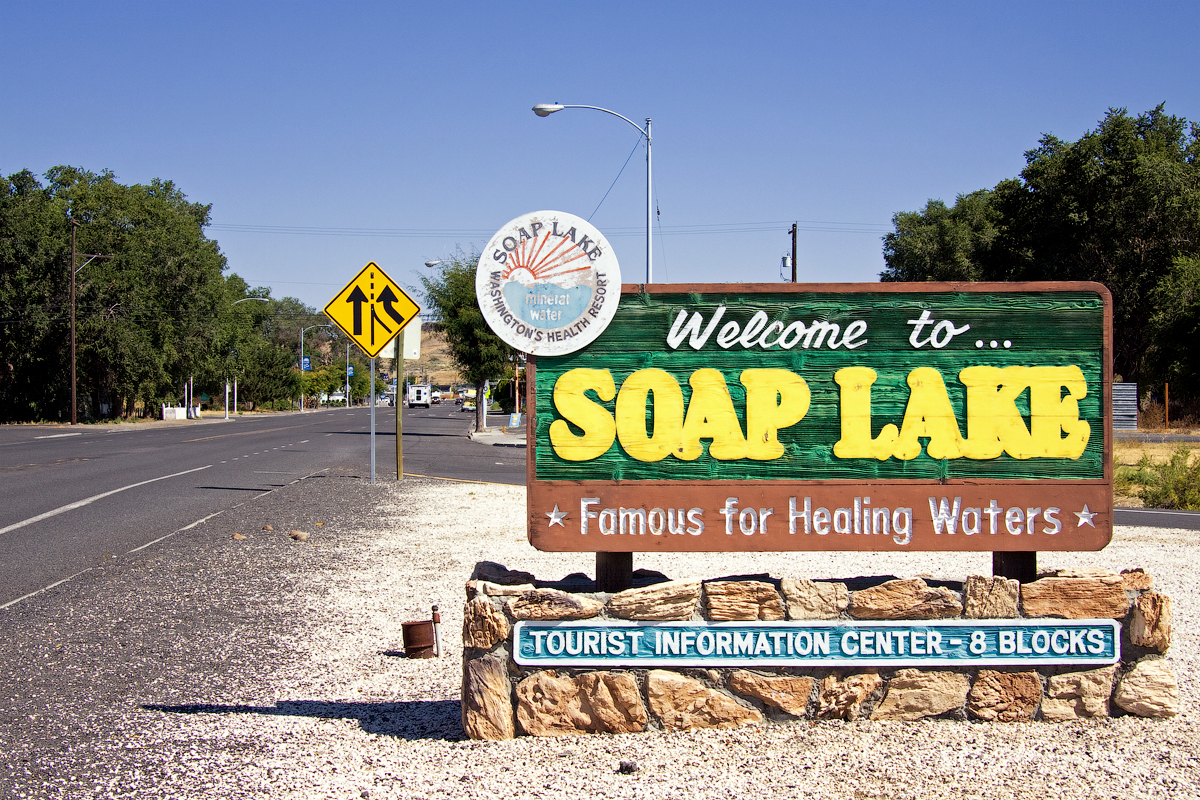